THE CAT'S PERSPECTIVE OF READING, WRITING AND LIFE.: AUDIO BOOK WINNERS!: We have a winner! We have a winner!   From our very first drawing for a free audio book of GOING HOME WITH A CAT AND A GHOST. I ...
Posted by Judy Howard at 11:06 AM No comments:

THE CAT'S PERSPECTIVE OF READING, WRITING AND LIFE.: A FREE AUDIO BOOK IS NOT SPORTSTER'S SECRET

THE CAT'S PERSPECTIVE OF READING, WRITING AND LIFE.: A FREE AUDIO BOOK IS NOT SPORTSTER'S SECRET:     Exercising regularly has always been on a cat’s priority list. We don’t live out our nine lives because all we do is sleep. We al...
Posted by Judy Howard at 2:06 PM No comments:

IMPROVING YOUR WRITING ON A BUDGET 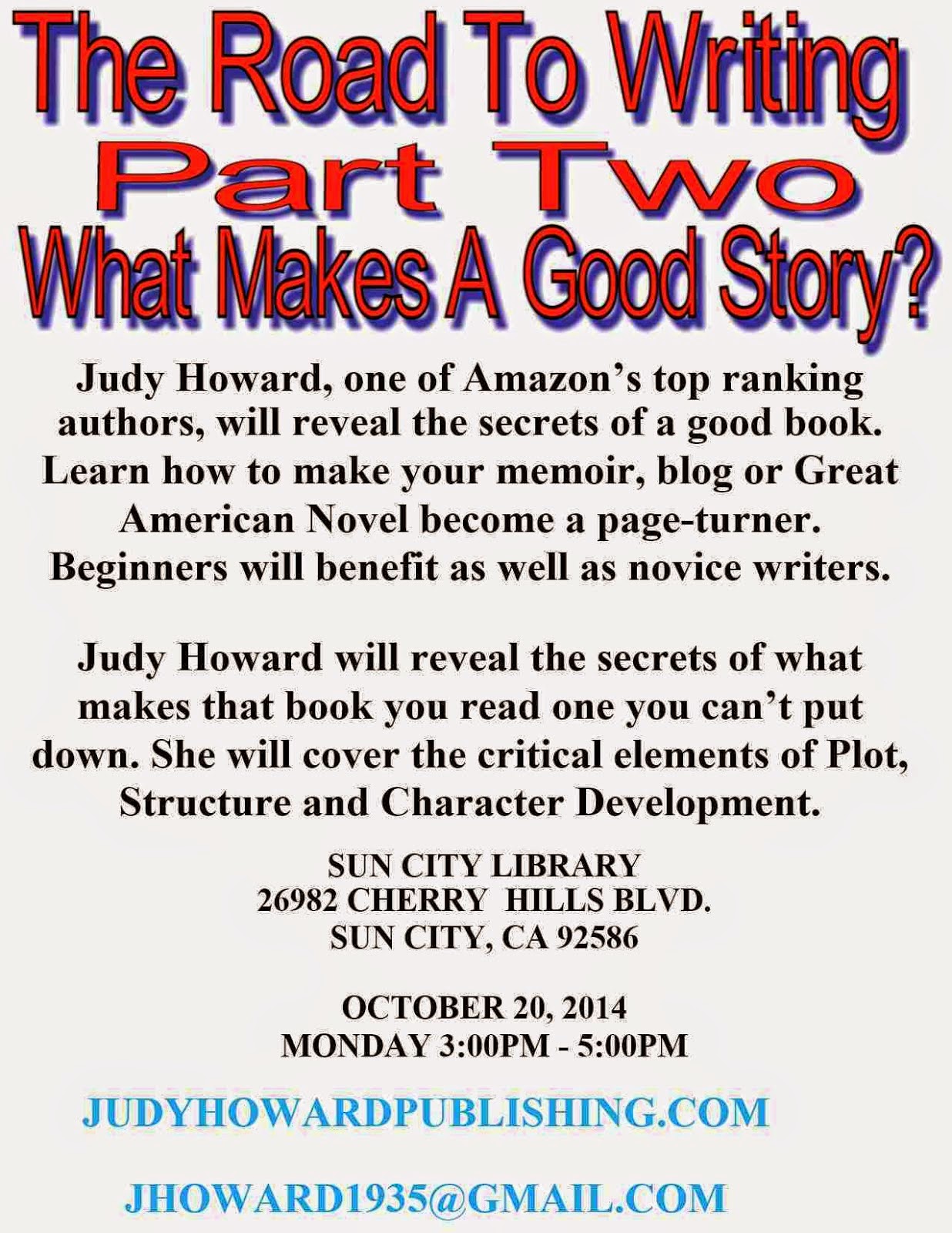 THIS ONE DAY CONFERENCE IS PRESENTED BY THE HIGH DESERT CHAPTER OF
THE CALIFORNIA WRITERS CLUB,
SATURDAY NOVEMBER 1ST IN
VICTORVILLE, CA.
HIGH DESERT CALIF. WRITERS CLUB CONFERENCE
Get ready for the HDCWC's . . .


Our keynote speaker is Christopher Vogler, author of "The Writer's Journey." This book has sold 180,000 copies and
is one of the classics that every writer should own.


We are ripe for an extraordinary “Howl at the Moon Writers’ Conference 2014” with internationally famous writer and teacher, Chris Vogler, leading off in the morning of Saturday, November 1st.

Christopher Vogler is THE expert in applying mythology to creative storytelling. Although he is a film executive and consultant, he is basically a literary expert on STORY, whether that be a novel or a movie. He is a Hollywood development executive best known for his guide for screenwriters and novelists: The Writer's Journey: Mythic Structure For Writers. Vogler has worked for Disney studios, Fox 2000 pictures, and Warner Bros. in the development department. He has also taught in the USC School of Cinema-Television, Division of Animation and Digital Arts as well as at UCLA extension.

Vogler is President of the company Storytech Literary Consulting, founded in 1999. Its Vice President, Brad Schreiber, consults on scripts and books, utilizing Vogler's approach. Vogler studied filmmaking at the USC School of Cinema-Television, the alma mater of George Lucas. As with Lucas, Vogler was inspired by the writings of mythologist Joseph Campbell, particularly The Hero with a Thousand Faces. Vogler used Campbell's work to create the now-legendary 7-page company memo for Hollywood screenwriters, A Practical Guide to The Hero with a Thousand Faces . Vogler later developed his memo into the late 1990s book, The Writer's Journey: Mythic Structure For Writers.

Today, Christopher Vogler continues to teach his techniques all over the world in leading Masterclasses.
﻿

Then . . . how would you like to really get to know the inside scoop of what goes on with agents? What’s the story? How do you get an agent, or should you go it on your own? We’ve got one of the top agents in Southern California to tell you all about it:

BJ Robbins opened her Los Angeles-based agency in 1992 after a multi-faceted career in book publishing in NY. She started in publicity at Simon & Schuster and was later Marketing Director and then Senior Editor at Harcourt. Her agency represents quality fiction, both literary and commercial, and general nonfiction, with a particular interest in memoir, biography, narrative history, pop culture, sports, travel/adventure, medicine and health.

A member of AAR and Pen USA West, Ms. Robbins has led workshops at UCLA Extension, UC Irvine Extension and at the Squaw Valley Community of Writers Fiction Workshop. On behalf of PEN, she has been guest speaker in numerous cities in the West as part of their Writers Toolbox program, including Seattle, Portland, Santa Fe, Dallas, Las Cruces, Flagstaff and Oakland. She was recently profiled in Writer's Digest and mediabistro.com.

The BJ Robbins Literary Agency works with both established and first-time authors and is looking for projects of literary merit that are fresh and original.

The early days of Ray Robinson's career path found him between a rock and a hard place.

It was 1987, and this geology major had trekked to Wyoming only to discover that he didn't really like rocks... Six months later, back in Akron, Ohio, he found himself applying for a job at Waldenbooks.

That application led to both retail experience as well as assignments at the corporate headquarters in Stamford, CT. He eventually became a marketing director for Pearson Education, an Indianapolis company specializing in educational books.

Prior to forming Dog Ear Publishing, he worked for a book packager building products for traditional publishers.

"We spent a ton of time learning all kinds of technology in bringing books to market more quickly and economically," he said. "We began to see that those who really cared about their books were the authors. Why shouldn't authors have access to all the expertise and technology of the traditional publishing industry and be able to produce their own books?"

When Robinson first entered the publishing industry, authors relied on "vanity presses" to produce their work - many of whom would charge $15,000 or more and leave the author's garage filled with hundreds of books.

Ray, along with coworker Alan Harris, joined forces with Miles Nelson to create Dog Ear Publishing to provide the author community a self-publisher with a heart. The group's application of new technologies and publishing on demand reduced the cost of publishing a book to a fraction of what it had been for previous generations; authors now have the ability to publish a book in as little as six weeks and print as few as a single copy. "An author sees his manuscript in published form and thinks you've performed a miracle," said Robinson. "No one writes a book overnight. It's someone's passion that's been worked on for years."

"I've enjoyed the book industry," Robinson continued. "And since October, I can't think of a day that I've not been thrilled to be here. We want to be able to keep that sort of environment forever."


There will be a break for lunch, which is on your own.

AND FINALLY A NOTHER ALL DAY  FORENSIC WORKSHOP FOR YOU CRIME WRITERS!
IN LONG BEACH, CA.
NOVEMBER 12TH


How Can I Add Photos to a Photo Album?


How Do I Add My Profile Pictu


This year, the conference will be held in Indianapolis (rather than Muncie) at the historic Columbia Club on Monument Circle. Guest of Honor, John Gilstrap. Dinner speaker, International Guest of Honor, Robert Wilson.

Posted by Judy Howard at 1:35 PM No comments:

THE WRITINGS OF A WANDERING WIDOW: Gifts For Half the Price!!

THE WRITINGS OF A WANDERING WIDOW: Gifts For Half the Price!!: When you purchase the PRINT VERSION of  any of the following books, or  if you have  purchased them in the past, you can now take advantage ...
Posted by Judy Howard at 8:38 AM No comments:

Gifts For Half the Price!!

When you purchase the PRINT VERSION of  any of the following books, or  if you have  purchased them in the past, you can now take advantage of a 50% savings on the KINDLE VERSION.