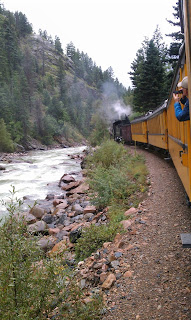 Trains fascinate me.  Mom said we lived on the wrong side of the tracks. As a child I didn’t understand but when the train rolled by our neighborhood, huffing and puffing, and sounding its long drawn out wail of a whistle as if out of breath from the excitement of its latest cross-country
adventure it instilled me with a wanderlust. The train brought the hobos, the bearded men in tattered clothing who stole rides in the boxcars. They were off limits to my sister and me, which only intrigued me more.  Certain these ragtime men could boast of unusual travels in far off places I imagined them visiting the badlands populated with cops and robbers galloping through the rough terrain on their muscular steeds.
Train routes climb mountains, crawl across desserts and over trestles with raging rivers or pounding ocean waves far below.  We have all watched while we whizz by on the flatland of the interstate while a team of two or three massive diesel engines, like a viper’s head, pull a mile long length of boxcars as it snakes slowly across sometimes treacherous landscape. And haven’t we all envied the Engineer’s view?

Well, now you can see for yourself!  A new pastime is trending across the country from Rhode Island to Oregon.

Of course, I am not one to pass up a new adventure. My quest took me to a small town named, Ione, in the state of Washington, thirteen miles from the Canadian border. It is here that the Lions Club now offers an opportunity to experience the scenery of Riding The Rails.

I discovered Box Canyon Dam Campground, which offered free camping just a couple of miles outside of Ione. I scored this wonderful campsite with a waterfall! How cool is that?


It is times like this that I lean back in my camping chair and count my blessing. I may not have achieved all my dreams yet, but it’s days like this that make my journey worthwhile. A trickling waterfall, the shade of fresh scented pine, the love of Sportster and everything I need in my home on wheels right beside me. I don’t think of another camper’s warning who has camped her often. “Be careful. I’ve seen cougars drinking from the waterfall.”  No, I won’t worry about that.


I had time to tour the area so I followed the Snake River north a couple miles to visit Sweetwater Falls at a rest stop between Box Canyon Dam and another charming town, Metaline Falls, which used to have waterfalls before the dam was built.

As I pulled into Metaline Falls the sky darkened with storm clouds and I thought a summer storm would be refreshing. I visited a historic hotel which offered homemade ice cream and a tour. When I left the hotel to return to the campground, I learned how changeable weather can be.  A summer storm was fully engaged as I expected, but not a rainstorm.   It was  HAIL!! 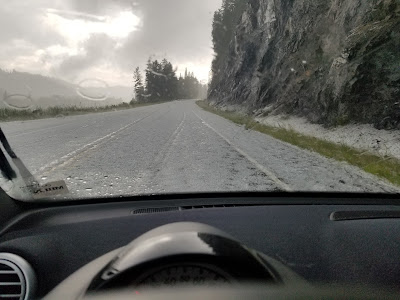 Today I ride the rails! I'm excited and pumped!  But I’m nervous too. I don’t want to be the weak link in my team. I worry that I can pedal for two hours. The route is a total of nine miles. The grade is 1.5%. That doesn’t sound bad to me.

Meet the couple from Montana (I’m so sorry I’ve forgotten their names) I couldn’t have been teamed up with anyone better. Their pastime is recumbent bicycling, which is like a bicycle built for two, but low to the ground so that the bicyclists   sit in tandem, lean back and pedal, much like what we will be doing on the rail car.  They called me “Plus One.”  There was not another single to pair up with me, so there were only the three of us  on this four seater railcar.


What a wonderful ending to a perfect day! 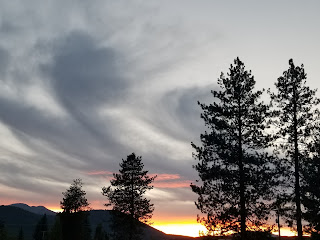