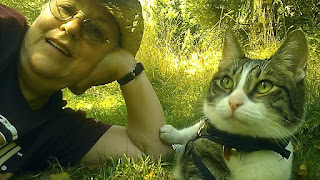 I love to be interviewed . During the process, I am forced to look inward. I always discover something that even I didn't know about myself!

How do I begin?


First, you must be passionate about your story. 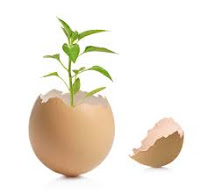 Before I ever begin a book, a seed or an idea begins to grow. Just a niggle, a notion really. Something, or someone touches me, turns my head, and turns me on.

I have been writing seven years. Not a long time. The  single most important  thing I’ve learned is, not only must  the story  be one  in which my readers will care about , but also  the story, must be a subject in which I care deeply.

Coast to Coast With A Cat And A Ghost, was not just my personal  story, but also a universal one of  accepting and understanding one another through the difficulties of  a relationship,  and in the process evolving  and becoming stronger and better as a result. I wanted the reader be able to close the book and believe there is life after the death of a loved one.


Second - write what you know.


If you don’t know, make sure you find out.”  To date, Masada’s Marine has been the  most difficult book  I have written. It is the story of a Marine veteran who comes home, unable to function in the country he had so proudly defended.


Much of the  two years writing  Masada's Marine I spent researching the subject of the military, specifically the Marines and the Iraqi war, all of which I was ignorant.  But the theme of the story –– overcoming difficult odds –– was a struggle I did know.

When my readers  read Masada's Marine I  wanted them to  step up,  push on with my veteran, and cheer as he marched through the events in his life. I wanted my readers to believe the possibility that what was happening could happen to them. I wanted them  wonder, “What would I do?” 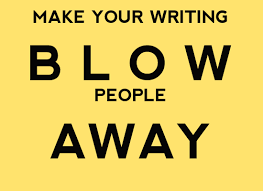 What will your readers  feel?

What will  your readers understand?

When they turn the last page of your book and say farewell to your characters?  What message to you want them to learn?  The more deeply you care about the theme the more involved your reader will be in the story.


Be passionate about the subject of your story.
Write what you know.
And write.
BOOKS BY JUDY HOWARD
COAST TO COAST WITH A CAT AND A GHOST 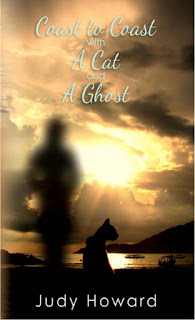 When her husband of 25 years passes away, Judy Howard is faced with confusing feelings and an overwhelming sense of loss. Accompanied by her cat, Sportster, and a stuffed doll whose uncanny and somewhat unsettling resemblance to her late husband leads to her calling it Jack Incarnate, Howard takes to the road on an RV trip from her home on California’s Pacific coast to Florida’s Atlantic. And what happens next surprises even her.
A touching, poignant, and empowering journey of discovery—and self-discovery, Howard’s debut is an inspiring road story full of surprises and universal truths.


GOING HOME WITH A CAT NAD A GHOST
In this mystery-romance, widow Judy Howard drives her RV along Route 66, encountering the ghosts of her teenage past when she was drugged, raped, and forced to undergo an illegal abortion. 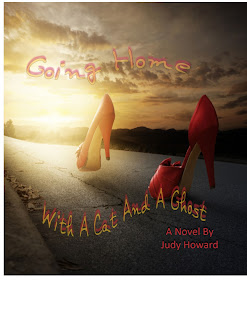 Tragedy strikes when Judy is drugged and date raped on a Saturday night in the parking lot of the town’s roller rink. But her high school crush Brad comes to her rescue, helping her deal with the crime perpetrated against her, even going as far as to arrange an abortion for her, though the practice is illegal. Judy must live in fear as the drug prevented her from knowing the identity of her attacker. Racked by guilt over the abortion and panic over the sexual assault, she accepts a college offer in California and flees to West Coast and begins a new life


After four decades of marriage, her husband dies and a high school reunion invitation from Brad threatens to shatter her illusory peace. Nonetheless, she summons up the courage to go, loading up her motor home and heading out on Route 66 with her cat named Sportster.

MASADA'S MARINE
Masada and her Marine, who were born two decades and two thousand miles apart, both aspired to do be the best that they could be. But first, they had to meet. 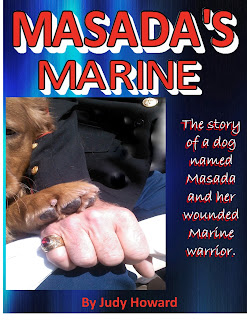 Masada began her journey in Illinois as a bumbling golden retriever puppy and emerged twenty months later as a proud, confident American Service Dog, ready and able to protect and preserve the life of Iraq veteran, Alex March, USMC.
Alex’s journey began in California as an ambitious boy who only dreamed of protecting and preserving life for the Corps, his country and his family. Twenty years later, he emerged as one of “a few good men,” and served with honor, courage and commitment …until he came home….
“An unseen attacker, camouflaged in the crowd, cooled its heels like a terrorist. It waited to follow Alex and his family home. How could he have known what lurked on the sidelines? Another war, an invisible war, he knew nothing about and had not been trained to fight.”
Follow Iraq veteran, Alex March, USMC and his American Service dog, Masada, who rescues him as they become the best they can be.

Posted by Judy Howard at 8:12 AM No comments:

Email ThisBlogThis!Share to TwitterShare to FacebookShare to Pinterest
Labels: be passionate, how to write, writing

Seven Things I Have Learned

Seven things I have learned.


I am responsible for my life, my feelings and my actions, no one else.


The day I wrapped my mind around this powerful concept, my life changed.


We all experience doubts. I am no stranger to the silent arguments, the whispers of   what if and coulda, woulda, shoulda.  I should have been a better mother. I could have worked harder, saved more money ….If I hadn’t been so blind, I would have seen…….If I had only followed my dream… We are quick to blame others, our parents, or situations, the economy, or our relationships for our failures and our lost opportunities. 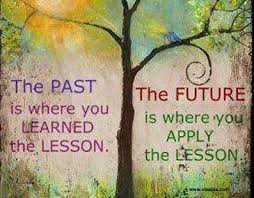 Whether we take responsibility for our lives or not, the accumulation of all our past decisions, experiences, and reactions mold us into the life we are living today. We cannot change that.


No one can   claim complete certainty about the paths they choose. I have made decisions whose aftermath clearly took me to the ground. Today I take responsibility for them, no matter what   grief, anxiety or heartbreak resulted. 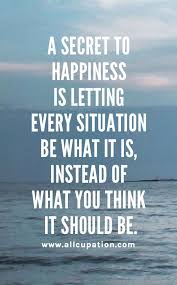 What I have learned is that owning our feelings and actions is the key to acceptance and a carefree life. Without excuses in the way we can rise up, push on –– adapt and
overcome


Today, as a full-time author and Rver, my lifestyle is beyond anything I could ever have imagined.  The forty-eight states which I have toured have inspired me, leaving me breathless from the beauty of this country. On my journeys I have met seemingly unassuming people who have shared their unbelievable and extraordinary stories.


My future is the promise of my dreams coming true if I just believe the concept - What the mind perceives it can achieve.


We all have goals and dreams. If just for today, we   take personal responsibility for our feelings, actions and life, the external events will be easier to accept.  If loving someone doesn’t turnout as expected, if situations and events happen to disrupt our plans, or if something just plain goes wrong, we can be comfortable knowing we made the best choices with what we knew at the time.  So for that reason, whatever decision you made  was the right one. 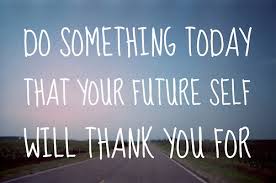 The secret to achieving your life purpose?? Don’t wait for the perfect moment.  The feeling of certainty never comes. Whatever the reason we are here on this earth and how  we are meant to live, it  is different for each of us. Ultimately, your life purpose is what freedom looks and feels like to you, not to anyone else, just you.

Books by Judy Howard
Author, Judy Howard’s mailing address is Sun City, California, but you will rarely find her there. Instead, you might find the top ranking Amazon author strapped in at the race track ready to check out the Mario Andretti Racing Experience or cruising  down Route  66.
Of one thing, you can be sure she is living up to a quote by Henry Thoreau --
“How vain is it to sit down and write, when you have not stood up to live?”